View Sally and Dylan in a larger map

My clammy hands gripped the helm. Slowly the imposing steel doors started to close behind me. The gates of Mordor locking me into a 1000ft chamber with 40ft high walls and an enormous red beast before me. Beneath me rumbled 40 horses chomping at the bit in eager anticipation.

Just moments before we had been rushing head first into the lock at 4 knots – which felt like 60 miles per hour - heading straight for the business end of a large firetruck red freighter. I had glanced at the advisor sitting next to me and he did not seem to be sharing my anxiety or concern. We were getting awfully close to the ship now....still no word to send up the mooring lines that would save our little plastic boat from collision with 20mm plate steel.

“Shouldn't we...” - I was cut off before I could finish by a sharp whistle from our intrepid advisor.
The 125ft mooring lines started to ascend the walls of the lock like vines from a cheesy 70's horror movie. Once all lines had been made fast on the large yellow bollards we snubbed to a jarring halt. All 8+ tons of momentum taken up on our tiny aft cleats. <Grimace>
“Hundreds of yachts go through the canal every year and survive...” - The little voice of reason chanted enigmatically in my ear. There we were, all trussed up like a bread stealing French peasant sentenced to be drawn and quartered. 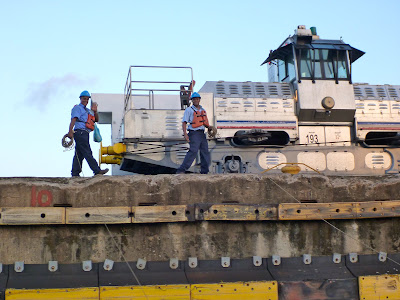 I started to relax. We were in, right? Made it to the first lock unscathed. We were tied into position. One down and 2 to go...Then the snot green sea below us began to churn a muddy brown. So this is what it must feel like to be a crouton in my stomach after ingesting a large nosh of indian food, warm beer and ecoli.
The waters boiled beneath us and we were battered to and fro as the locks filled from pipes underneath us. “My poor cleats...”

“What if...a line snapped or a cleat broke or a line handler received an important Facebook message and dropped the line they were managing...” - I hate my little pessimistic 'What-If' devil that sat on my other shoulder. All the inevitable ends started whirling through my mind. Impaled on the red beasts propellor. Embracingly close to the cold steel lock doors. Examining slimy algae in detail on the concrete lock walls.

The box was still flooding. Waters seemed to bounce from one side of the lock to the other. Testing our line defences like the raptors in Jurassic Park (1, not 2 – 2 was a complete let down and is $5 and 1.5 hours of my life that I will never see again)

After a few minutes I realised that panic had been averted purely by my incredible super powers as skipper and that all would be well. Line handlers drew the lines in, keeping the right amount of tension as we rose up from the depths to join humanity once more. The whole process was a mere 20 minutes. I stood in the cockpit and shook my fist at the mildly overweight gringo lock master and bellowed - “Is that all you got!”

The red beast AKA “Youn Ki Kip Kai – Panama” seemed to take offence at this and decided to spin its propellor a few times for good measure. The resulting prop wash saw our water speed gauge peaking at 4.5 knots...while we were stationary!

Lock doors open and waters now calm, the big red made her way lazily out of the lock and into the second. It was easy for her, as she was pulled through with the aid of powerful locomotives or “mules” - so named as once upon a time a team of Shrek's best friend used to be tied to ships and haul them through the locks.

Once beastie had left us in peace, our slightly bored looking line thrower's on the lock walls above us casually threw our lines in the water. I figured that this was not some sort of mass action strike or offence at my fist waving, but part of the process as the throw lines appeared to be still attached. Our hand liner's were obviously not about to yank us through the lock like their motorised colleagues and so I requested the aid of the 40 - chomping at the bit – horses to do it for us.

We chugged our way into the next lock looking like seasoned veterans. The lines went up much the same timing as previous, gates closed, water battered us around and Orion held her own like Rosa Parks on a bus to a skinhead convention.

Gates opened and it was a “rinse and repeat” of the previous two locks. The final of the Gatun locks. The doors opened on to the Gatun Lake and the strangely named Panamanian registered vessel returned her lines to the mules and with out so much as a toot of the horn chugged her way onto the lake. I thought we had shared a bit of a moment together through the 3 lock ordeal, however she apparently had a schedule to keep.

The hand liners tossed our lines into the water, seemingly glad to be rid of another small vessel in their expensive locks. We puttered our way onto the muddy brown drinking waters of the Gatun Lake and finally my sphincter unclenched. Congratulations and high fives were cast around with playful abandon (not due to my unclenched sphincter, might I add). Farewell Atlantic Ocean.

We motored to a set of mooring buoys and tied up for the night. The day was done. The supposed hardest part over.

The next morning saw me wake up at 5:30 like a kid at christmas. “Hands off cocks and grab your socks!” - There was lots to do before the imminent arrival of the new advisor. I spent the first 20 minutes pottering around getting in Sally's way and muttering to myself. Two activities at which I excel!

With engine checks done, crew roused and kettle on, we were ready to begin the day.
The advisor arrived shortly after 6am and I impressed him with facts that Orion cruises gently at 5 knots. With that we tossed off the mooring lines and chugged towards the channel and the oncoming northbound ships.

It was a fairly uneventful motor. We cracked out the jib to squeeze an extra few miles in before our decent to the Pacific. The advisor we had enjoyed a good few practical jokes at my expense threatening to delay us in Gamboa as one of our mooring lines was a wee bit shorter than the regulatory 125ft. The crew and advisor thought this very amusing, however the skipper wrote all their names on his “People to kill later” list.


There were a few other boats going through the canal at the same time as us. All had larger boats, engines and / or ego's than I and so overtook us fairly early in the transit process. This was all part of my incredibly sneaky and cunning plan to arrive last. With 3 vessels ahead, chances were that they would raft up together leaving us all alone to go through centre chamber (the safest option where I am master of my own destiny – and not Popeye on the centre vessel in the raft of yachts).

We arrived at the Pedro Miguel locks to find this to be the case. Speedy Gonzales 1,2 and 3 had won the prize to raft up and Cap'n So Poke Orion was to go through centre chamber. Great success!
I charged up the cattle prod in order to keep the Orion crew frosty and we entered the first lock.
Everything and everyone worked as they should. We were behind the raft of 3 vessels and once again mooring lines went up and onto bollards at the last second. I am certain that this is done to test if the skipper can hold his bladder under pressure (fortunately our cockpit has drains right below the helm). 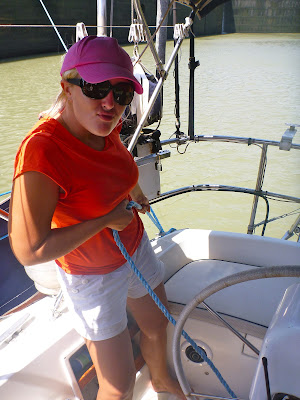 Down locking is lovely and calm. As long as the line handlers are feeding out the line nice and steady, all is well. I even vacated the helm and wandered the deck to pat a few line handlers on the head and provide a few patronising words of encouragement that any good leader would under such circumstances. 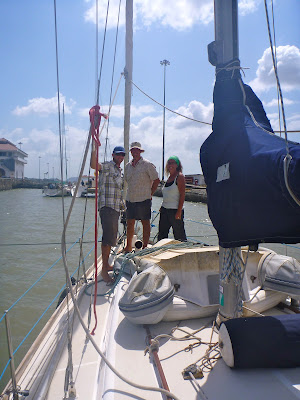 With lock empty, the gates opened and the raft bumbled forward. With a blast of the horn the mooring lines were tossed into the water but no longer attached to the throw lines. At first I thought this to be some sort of monumental cock-up, only to learn that the Panama Canal Authority did not pay the throw line guys enough to have them walk the 1.1 miles of the Miraflores lake to the next set of locks.

We puttered over to the Miraflores locks and once again survived monkey fists hurled at the boat by the excitable line thrower's ashore. The crew was getting quite good at ducking and diving and I considered momentarily signing them up as a dodgeball team (with me as coach due to my outstanding leadership skills).

The excitement was almost tangible. We were nearing the end. The Pacific was but a few hundred feet away. We downed the first lock like a drunk having his first beer of the day and moved to the last lock of the mighty Panama Canal.

The doors swung to as if St Peter himself was there to open them. The water behind us was as eager to meet the Pacific as we were and shunted us along at almost 4 knots. We were spat out of the final lock of the Panama Canal and into the Pacific Ocean. This was the first time Orion had been in the Pacific and she seemed to love it.


I never imagined that we would get here. This is where the fun really begins!
Posted by Dylan Trompeter at 10:51

A cruising blog of a couple from London that gave up the rat race in favour of buying a small yacht and going cruising around the Caribbean. And now heading west to Australia!